Irrelevant questions, mind numbing answers, deluding conclusions forcing itself into rapid and tormenting contemplation; preserved lice from the ghastly head scratching while rummaging through the torrid landscape of the residence of the intellect, resulting in jolts of brilliance and empathy, reverently inking them into the vast white canvas of loneliness and commitment while believing and simultaneously hoping that the air filtering through the nasal passage and into a miraculous contraption created by a mystique entity is the air of recognition and realization, the bread and butter of pride and prejudice, resulting in madness in both reality and insanity, two worlds divided by a thin strand of hair.

Many talk of the facts scribbled in these withering books of history and mystery, jeopardized by the aging sun and the dying moon, dilapidating shelves made of infinite lives, lives spend basking the warmth and glory of a burning giant along with the torment of feverish winds and vertigo of some gazillion molecules suspended midway between heaven and hell, challenging time and tide as they grow tall and green to finally succumb to a higher intelligence and serve their purpose, of which they little know, cause for them they were the first to live and the last to die, for this is written in every pixel of their existence.

The chirping sounds followed by the rustle of feathers and flutter of wings attract the cranky creek of an ancient door, light floods in through the corrupted windows and roofs of the adjacent room lighting a path to follow onto the gathering of the most brilliant minds of their epoch. Minds in the most varied proportions and existence in the history of this world, a world of coexistence and confluence, where rivers recite to the mighty mountains the deep songs of the oceans and seas, where every stone was responsible for the creation and destruction of species little known to the lesser beings, where harmony and symphony went hand in hand and weaved a blanket of love and affection among the opposite poles, inciting beauty and slime mingled passionately to mix the elixir of a hundred thousand tales.

The Library of Gaia.

4 thoughts on “Time before existence….” 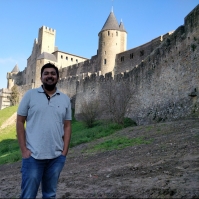 Rants of the Rumbler

Notes & Stories of experiences of life in a city as well as a sea side town. Some understandings, some observations and random thoughts that I would like to share.

A daily selection of the best content published on WordPress, collected for you by humans who love to read.